Of Book Collections and Shiny Objects

Sometimes we find ourselves on random journeys through time. We happen upon something that sparks a desire to learn more, to investigate, to research. We become curious and one thing leads to another. Oddly enough, this week learning about the Jacquard loom started with Ikea shelving.

While moving our book collection here at the studio during a new bookshelf install, I found a treasure. On top of one of the shelves was an old stack of Jacquard cards similar to those pictured above. They got me thinking about the awesomeness of the technology I was holding in my hands and how one man changed the face of textiles nearly overnight. Looking into the history of this “loom” I found a really wonderful and concise definition of just what or who Jacquard is from History Mesh. (history mesh jacquard story)

“The Jacquard loom is a mechanical loom, invented by Joseph Marie Jacquard in 1801, that simplifies the process of manufacturing textiles with complex patterns such as brocade, damask, and matelasse. The loom is controlled by punched cards with punched holes, each row of which corresponds to one row of the design. Multiple rows of holes are punched on each card and the many cards that compose the design of the textile are strung together in order.
The Jacquard loom was the next big step in weaving technology; previously, only simple designs had been possible, but the introduction of punched cards to store the patterns meant that new, complex designs were now possible with only a single warp (the lengthwise threads through which the weft is woven). The Jacquard loom is not actually a separate loom type; instead, it was a new type of head that was put onto existing looms, meaning that installing them in factories was not as expensive as it could otherwise have been. Jacquard heads are still in use today, though they are now controlled by computer rather than by punched cards.” 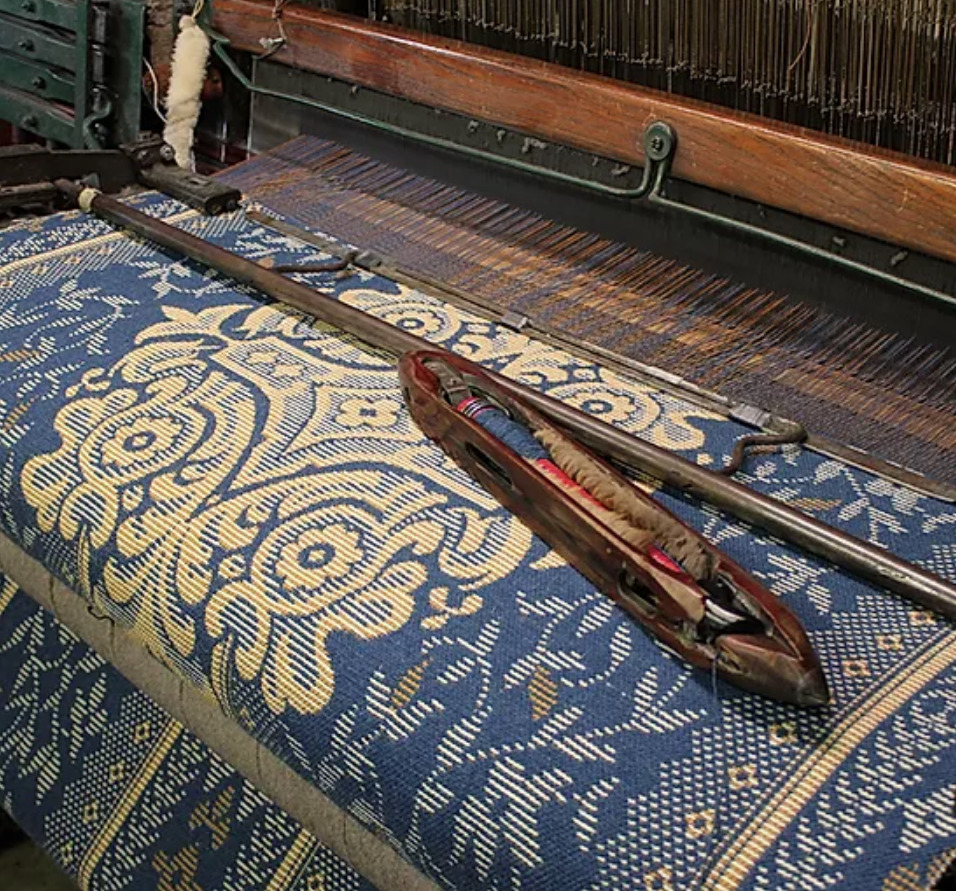 History In Our Own Backyard

We are fortunate to have a wonderful resource right here in our county: a factory where historically accurate fabrics are created on antique jacquard looms. Family Heirloom Weavers was founded in 1983 by master weaver David Kline and his wife, Carole. Currently, they have 37 jacquard looms still in operation, creating one-of-a-kind textiles for many different clients. They have been honored to create Ingrain Carpet for 10 former US Presidents’ homes. Their more recent projects include authentic period carpeting for Apple TV’s series, Dickinson, and HBO’s Downton Abbey. See if you can spot their work in an upcoming episode!

Want to see more for yourself? Please visit their site for more information about their family and their products.

Mark Your Calendar for Our Field Trip!

What’s better than reading about Jacquard looms? Seeing them in action for yourself, up close and personal. Red Stone Glen will be hosting a factory tour and meet up on May 16th 2020. If you would like to join us, or would like more information please join our events mailing list to stay in the loop as information is released for this free event. 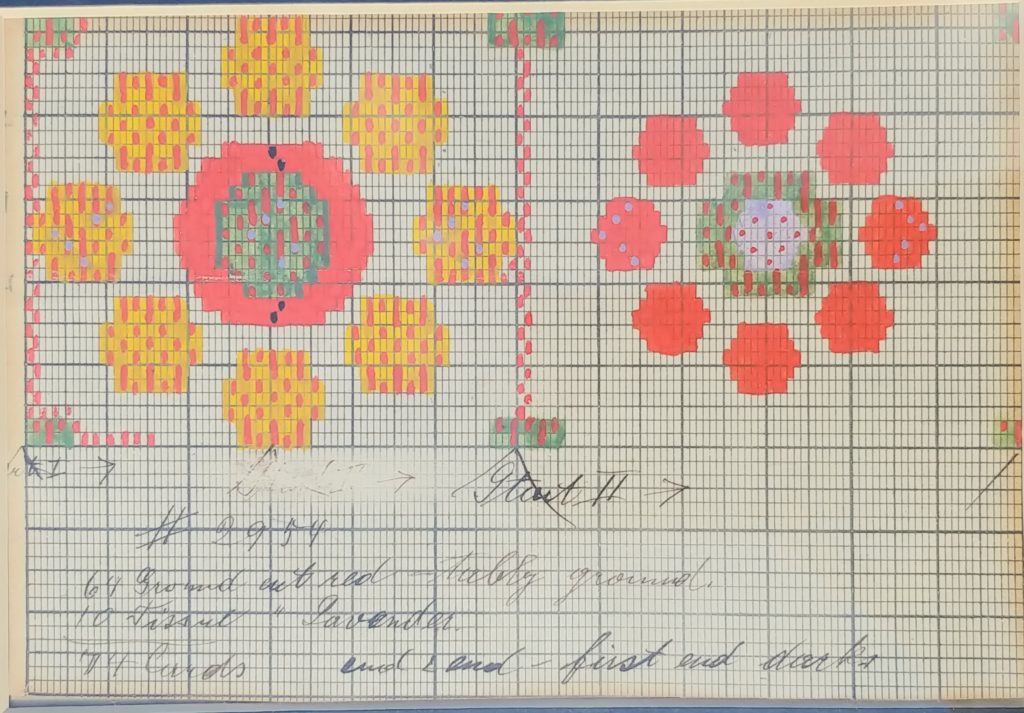 In addition to the loom, or head, sometimes the design process can be intriguing in itself. This little gem featured above is from Tom Knisely’s collection. A precursory drawing to help the weaver determine which card will have specific holes punched out to designate the shape of the image and its color usage. In this case, the design was applied to a tie at the Tioga Silk Tie factory. 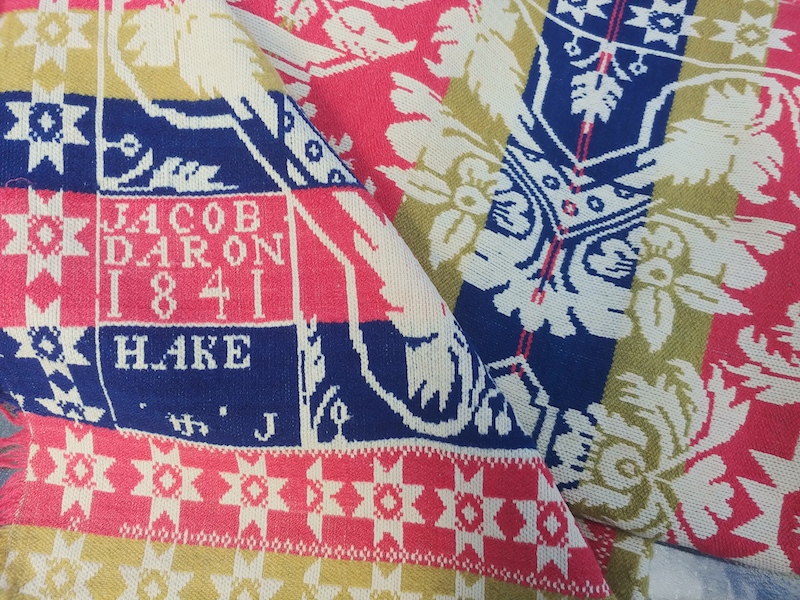 This piece from our collection was woven here in York County by a prolific weaver named Jacob Daron in 1841. Only 40 years after it’s introduction to the world in France, it was accessible to weavers in rural North America. If this type of weaving intrigues you, visit The National Museum of the American Coverlet. It is home to more than 500 different examples of American Coverlets including many Jacquard woven pieces also located here in Pennsylvania.

But How Does It Work?

That’s all wonderful in theory but the idea of how the cards work is easier for us to understand if you share some common experiences such as seeing a player piano operate, or the fine mechanics of a music box. But it’s a whole different experience to see it in action as threads are lifted and exchanged. The fly shuttle racing pic by pic is exhilarating to watch!

Thanks to the Victoria and Albert Museum of London for creating a video to help visualize the simple yet inspiring mechanics of how the Jacquard loom operates. Take a few moments to watch this silent film and enjoy the wonderful animations demonstrating the weaving process.

I bet you’ll even return to watch a second or third time! Trust me, you’ll be grateful for the silence, given how loud they are in person!

Follow those moments of intrigue in your daily happenings, take the time to dig deeper and find out the whole story…