Gay McGeary has been researching and weaving coverlets for over twenty-five years. Nineteenth century coverlet patterns, weave structures and fringe techniques fascinate her. While the inspiration for her designs originates with early coverlet weaving, she finds that her weaving software is an invaluable design tool. It allows her to visualize a graphical representation of pattern, weave structure and color for her proposed work.

Gay has presented workshops and presentations of her research and weaving for local and state guilds, Complex Weavers Seminar 2012 and Mid-Atlantic Fiber Association Seminar 2015. She contributes articles about her weaving to Complex Weavers Journal, Shuttle, Shuttle & Dyepot and the Early American Coverlet Study Group. For More information about Gay’s work see her website at http://www.coverletweaver.com/. 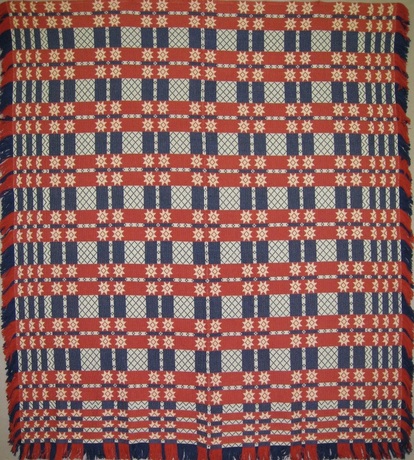 Description: This coverlet was inspired by an early coverlet owned by the Cumberland County Historical Society, Carlisle, Pennsylvania. Drafts for this pattern are also found in the nineteenth century manuscripts owned by two Pennsylvania German weavers from Adams County, Pennsylvania: Christian Frey and Jacob Biesecker. Copies of the later are located in the library of the Lancaster County Historical Society and the former is shown on page 135 of Tandy and Charles Hersh’s book entitled Rural Pennsylvania German Weaving 1833-1857, and the Christian Frey and Henry Small Pattern Book. 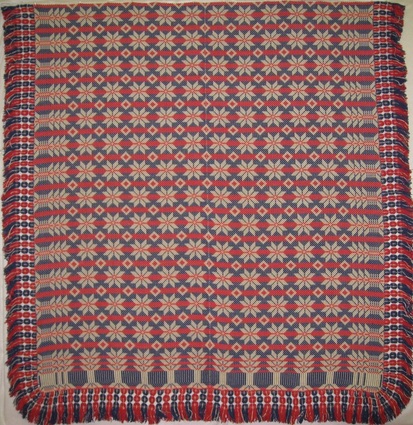 Description: This coverlet is based on a pattern in early coverlets in Gay’s collection. The draft can also be found in Jacob Angstadt’s Diaber Book. The trees used in the borders on the sides and the bottom are designed by Gay and are variation of the snowball motif. 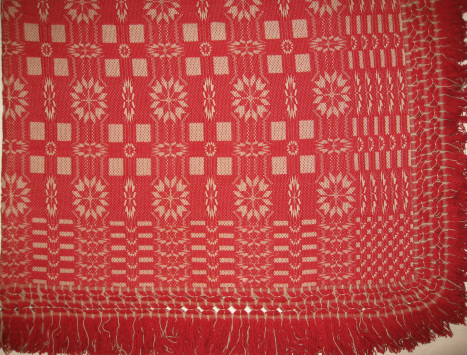 Description: This star work pattern is one of my favorites. It is inspired by an early coverlet original owned by Tandy & Charles Hersh who were kind enough to share their coverlet collection with me. The fringe is woven separately and sewn onto the coverlet.